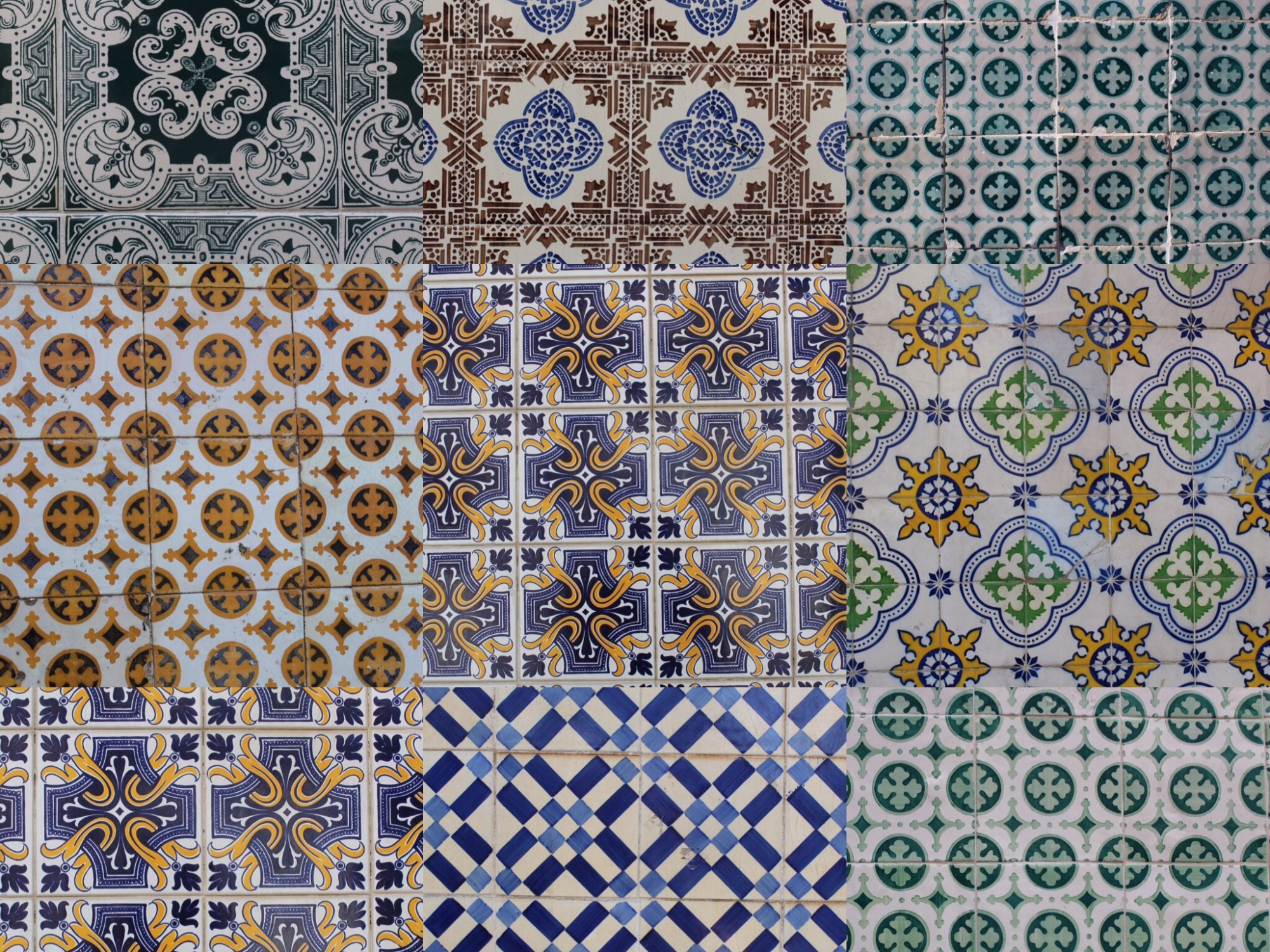 As my winter ski season was coming to end, I wanted an adventure to look forward to after a tough season of early morning breakfast shifts and cooking for 18 people, constantly always being on the go. I thought to myself, where is a laid back and cheap country in Europe? Portugal immediately sprung to mind!
As my partner, Pete, and I are working in Slovenia for the summer again we didn’t want to have to drive all that way and back so checked easyjet for flights and, bloomin’ ‘eck, they were super cheap. From Geneva into Lisbon cost us under £40 each then out of Faro for a mere £13 each. It was a no brainer really. I hope the low prices stay the same after Brexit…

Despite easyjet being cheap, our flight was typically delayed so we didn’t get to our Airbnb until 1am but Uber saved us from the hassle of public transport. Our Airbnb apartment was lovely and if you’re thinking of using Airbnb – go for it! It’s a cheap and great way to really see a place and live like a local. We had our own cosy flat right beneath the castle walls in a great location surrounded by narrow cobbled streets, nice restaurants and bars. 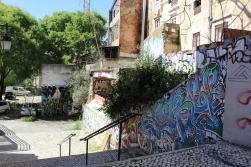 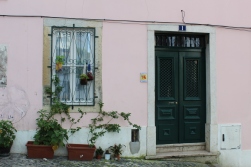 We spent our first morning enjoying a mega lie in then headed out in search of caffeine. We found a little neighbourhood cafe right by our apartment and had a quick espresso which only cost 60 cents EACH! We are far too used to paying ridiculous Courchevel ski resort prices. We brunched at Eight The Health Lounge which is modern cafe on Figueira Square.  The Health Lounge served up beautifully arranged paninis, toast, salads and smoothie bowls. I went for the Golden Spice (mango, banana, coconut milk, turmeric, ginger and cinnamon) smoothie and avocado toast. You could tell the smoothie had been made with fresh fruit as everything tasted delicious and it filled up us for an afternoon of sightseeing. The place had a friendly, relaxing atmosphere with super helpful staff.

Little shop inside the cafe 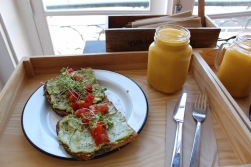 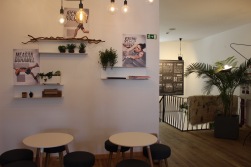 Menu
We spent our day simply wandering slowly around Lisbon’s streets checking out all the street art and places to stop and get a beer. We stumbled upon a little square where there was a small tourist foodie market and a live band playing. There was amazing views out to coast and of the castle. When Pete, my partner, and I travel in cities, we really just like to follow our noses and explore without a map unless we are trying to find somewhere to eat on Happy Cow. When we have no agenda we just like to people watch, find interesting streets and little shops. We’re not really into museums or art galleries, especially when the sky is blue and the sun is shining. What I loved most about Lisbon is all the tiles that are on the side of most of the buildings. I was snapping away at so many of them with my camera, I probably looked like a tile enthusiast to people walking by. 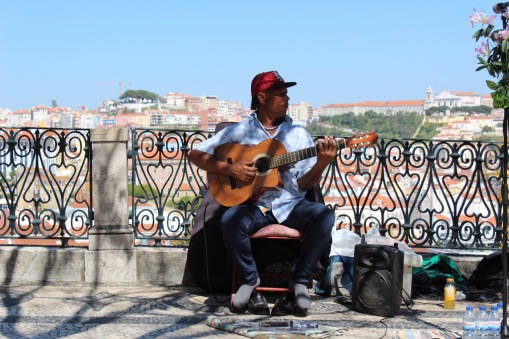 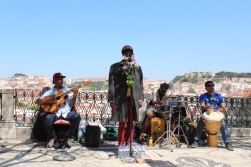 View down into Lisbon
After enjoying some live music and a beer in the sunshine, we had read about a tiny bar where you try the local ginjinha cherry liqueur. For €1.35 you can sample a shot sized amount of this cold, traditional drink. It was actually surprisingly nice for a liqueur and I enjoyed drinking it slowly rather than shotting it. This historic bar can only fit about three people in here at once and we shared it with a local flirting with the bar maid! 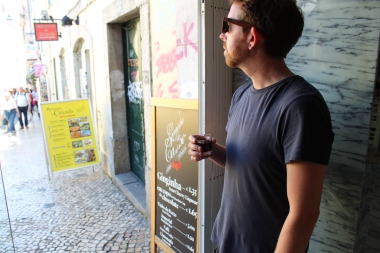 Pete enjoying his shot
I was excited to eat out in the evening at The Food Temple as I’d read great reviews on Happy Cow and was advised to book in advance as it was a super small, busy restaurant. When we arrived I was told they hadn’t received my reservation that I made on their Facebook page, but hey they still managed to squeeze us in. The menu was small and it changes daily; it was soup, choice of three tapas, one main and desserts. We were recommended to have it all but we actually weren’t that hungry so just had the tapas to share. Despite the raving reviews on Happy Cow I left feeling disappointed with my experience here and I wish we’d dined somewhere else. Two of the tapas dishes were trying to recreate seafood flavours and they made some vegan shrimp which looked and tasted so much like real shrimp, which freaked me out a bit. It wasn’t the worst vegan food I’ve had but it certainly wasn’t the best.

Vegan tapas
We wanted to get some supplies for our camper van which we were hiring so we found a local MyAuchan shop which sold some incredible vegan goodies like VEGAN CHORIZO, flavoured tofus and seitan burgers. It was 500m away from Graça gardens where we spent a lot of time chilling and sunbathing. The best miradouro of Lisbon is just up the steps from the garden and you have views out to the ocean and Ponte 25 de Abril. We also found an incredible Asian supermarket which made me wish I bought hold luggage to fill a suitcase up with amazing ingredients. We bought some soya mince for cooking in the van and some Indian masala tea powder. 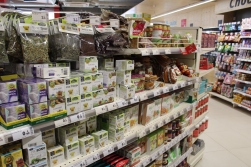 MyAuchan
We had a pretty fleeting time in Lisbon but what we experience of it we absolutely loved. I think in hindsight we would have preferred two full days exploring but we managed to fit a lot in. We definitely would like to return in the future and I do recommend it as a place to visit on your bucket list. For the rest of our trip in Portugal we rented a cheap camper van from West Coast Campers and we picked it up on the outskirts of Lisbon and planned to head for the coast.

Orange trees in the city 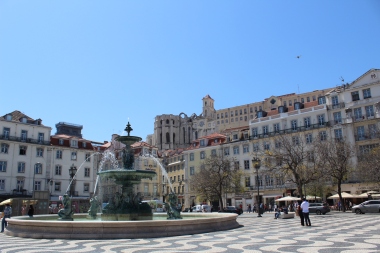 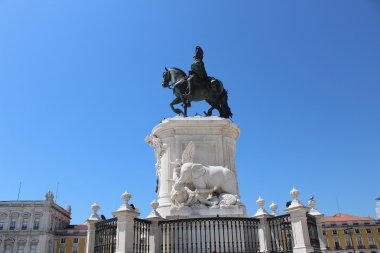 Statue of Dom José I 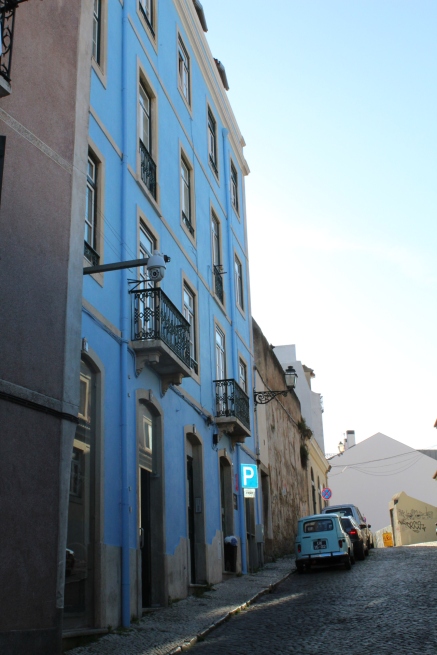 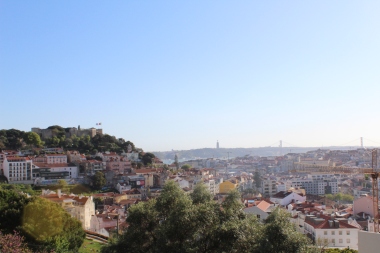 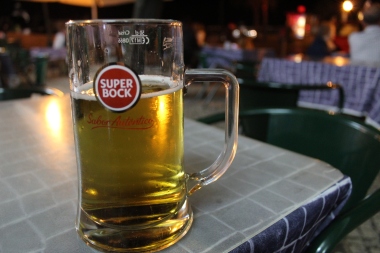 One thought on “The Beautiful City of Lisbon & Vegan Eateries”