Let’s begin this post by letting you know that I am obsessed with halloumi. When I’ve been working in France or Italy, I’ve missed the squeaky cheese so much as you can hardly ever find it abroad. Even when I’ve travelled through the Greek islands and volunteered in Crete for a summer, it was still a rare find!

My boyfriend is also a huge halloumi fan so Cyprus was an ideal place for a jolly camping holiday after our ski season.

A traditional meal in Cyprus is the notorious meze. Meze is numerous small tapas style dishes delivered to your table in stages. It’s a social meal needing a minimum of 2 people to order it. We found Imogen’s Inn in the village of Kathikas on the way to Lara Bay. A quick glance at the Lonely Planet told us that it has vegetarian meze on it’s menu. This wasn’t an opportunity to be missed! The meze starts with a Greek salad, mixed olives, houmous, tzatziki and bread which is then followed with hot dishes. We had spinach falafel, fried aubergine, feta parcel with pomegranate syrup, courgette and egg balls, grilled halloumi, cooked vegetables with butter beans, aubergines in a parmesan and tomato sauce, spinach pie and vegetarian moussaka. The dishes appear small at first but you soon start to fill up yet you want to carry on eating because it’s all so delicious. Washing that down with a carafe of red wine and a beer cost only €40. Meze is amazing!

We tried to recreate our own mini meze at the campsite.

Most days we visited the local bakeries for lunch. Halloumi pies are sold for €1.60 and they are tasty, filling and cheap! Another great brunch/lunch stop is the Kouyiouka Watermill which is just off the main B7 road south of Polis. They have traditional Cypriot vegetarian breads that you can enjoy with a coffee frappé on the balcony overlooking the orchards. Two breads and two coffees cost €7. 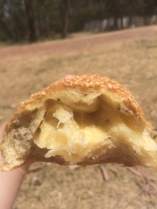 The Quest for the Best Halloumi

I wanted to find the best halloumi cheese in Cyprus. There is so much choice in the supermarkets; from the cheaper type we can buy in the UK to halloumi that costs €13-14 a kilo. We stumbled upon the village of Anogyra on the way to the Troodos mountains. It is a picturesque village with cobbled streets and little stone houses. It is home to the Carob Museum, an Olive Park and Anoyrkatiko Dairy Farm which produces halloumi and other local cheeses. The farm workers are welcoming and we got to sample freshly made halloumi and anari cheese. The halloumi was one of the best I’ve ever tasted. I usually dislike it raw but it was so fresh it melted in the mouth. The anari was mild and soft and we were served it with carob syrup which is typical in Cyprus. It is usually served at breakfast. The farm is located to the west of the village, follow the goat sign which is posted below.

I found it quite hard to find any thorough information about camping in Cyprus so I thought I would share a bit of what we found. 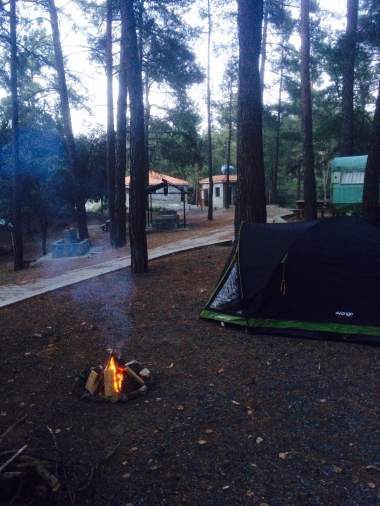 If you want to camp in Cyprus and be able to fully explore the island, it’s easier to hire a car as public transport is limited. We used Elephant rentals as you can pick up and drop off the car from Paphos airport at any time without any extra payment and it’s fully insured. It’s also pretty cheap, €109 for 9 days! I’m sure you could haggle for even cheaper deals in Paphos town as there is a lot of competition.

We brought all our own camping gear including a stove but the only gas available is the ‘camping gaz’ style pierceable cartridges, which unfortunately was not the right one for us. However, there are cheap (€9) camping stoves available are Papantoniou supermarkets in Paphos and Polis at the back of the stores. We stayed at Polis Campsite which is located right on the municipal beach. It has basic and clean facilities. It costs €10 a night for a car, a tent and 2 people. There is a slightly overpriced bar and restaurant but also there are supermarkets close by in the village. Polis is a great location to access the Akamas peninsula, the less developed northern coast and Turkish occupied Northern Cyprus.

We also camped in the Troodos mountains at Platania State Forest campsite. The main campsite 500m away from Troodos square doesn’t open until June. Plantania campsite has basic facilities and I’m not sure how much it was as there was no one around to pay! There is another State campsite around Troodos area too called Kampi tou Kalogyrou. There are also other campsites around Cyprus at Coral Bay near Paphos town and Governor’s Beach near Limassol which are easy to find. Wild camping is also very accessible. 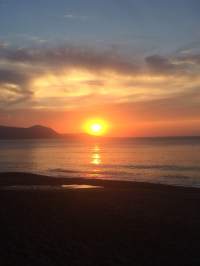 Sunset over the Akamas peninsula

Cyprus is such a beautiful and interesting country. Away from the resorts and development there are secluded beaches with crystal clear waters, great hiking paths with panoramic views of the whole island and an abundance of wildlife and nature. We were even lucky enough to be able to watch a loggerhead turtle lay her eggs at Alagadi beach with the volunteers at Society for the Protection of Turtles (SPOT).