My third ski season came to an end with lots of picnics, beer drinking and not much snowboarding. The sun was shining for the last 3 weeks which quickly melted the little snow Courchevel got this year. I enjoyed all parts of the season from the cold powder days early in January then spring slushy days in March and April.

As I work seasonal jobs, after about 5 months you get ready for the next adventure and when the sun starts hotting up and you start to get a tan, you know that summer is just around the corner. Leaving La Tania is always sad but I will be returning for another winter season so I know that in a few months when I start to miss snowboarding, it won’t be long until I’m reunited with the snow.

We planned an end of season camping trip with our good friends Glenn and Sara and packed up our Honda estate ready to roll. Safe to say it was a cramped 5 hour journey to Castellane but we made it in one piece thanks to Pete’s excellent driving. I am very reluctant to drive in France as French drivers scare me!

Castellane is a pretty village with all the amenities you need. It is located in the south east of France very close to the Verdon Gorge. This is a spectacular river canyon that stretches 25 km long. We hired a small caravan at Le Ferme de Castellane campsite just outside of the village centre. It was a cosy experience for 4 adults but it was perfect for what we needed. We had one full day to spend in the area so we decided to walk part of the Sentier Martel trail starting from Point Sublime. We took a dip in the freezing cold river and enjoyed a lovely picnic. The views are truly breathtaking.

Birds of prey circling the gorge

Glenn and Sara had a train to catch so we dropped them off at Nice train station and we carried on to the quaint village of Peillon, where we camped for 2 nights at Camping de la Laune. A steep 30 minute hike uphill from the campsite leads you into Peillon village centre. It has wonky, narrow streets that lead to the main square with a beautiful church sitting at the highest part of the village. The oldest houses date back to the 17th century. The olive oil and flour mills closed down in the 1950s and were restored in 1983. We have bought a bottle of the locally produced extra virgin olive oil which is delicious.

Living it up in Monaco 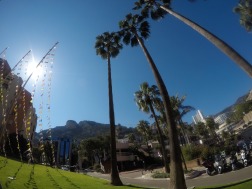 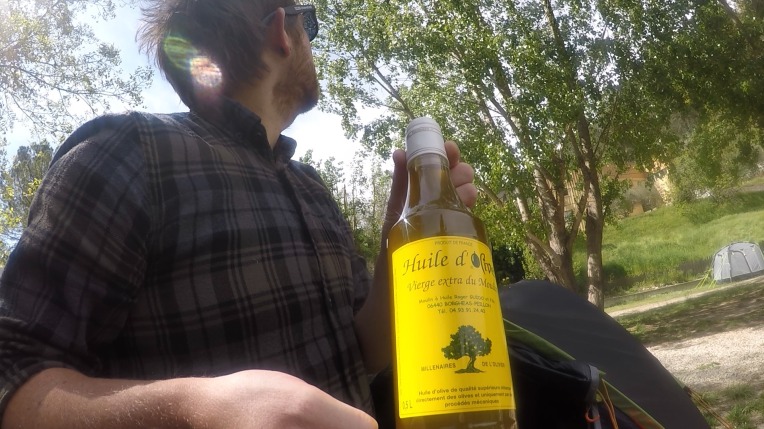 During our stay in Peillon, we drove into the small country of Monaco and walked along the peninsula of Cap d’Ail in France to Plage Mala beach. We actually drove into Monaco without even knowing we had crossed the border and cruised around Monte Carlo. The 6km linear walk was stunning with lovely views of the Mediterranean sea and old French houses. We arrived at the beach ready to swim but I keep forgetting it’s only April and the sea was so cold! 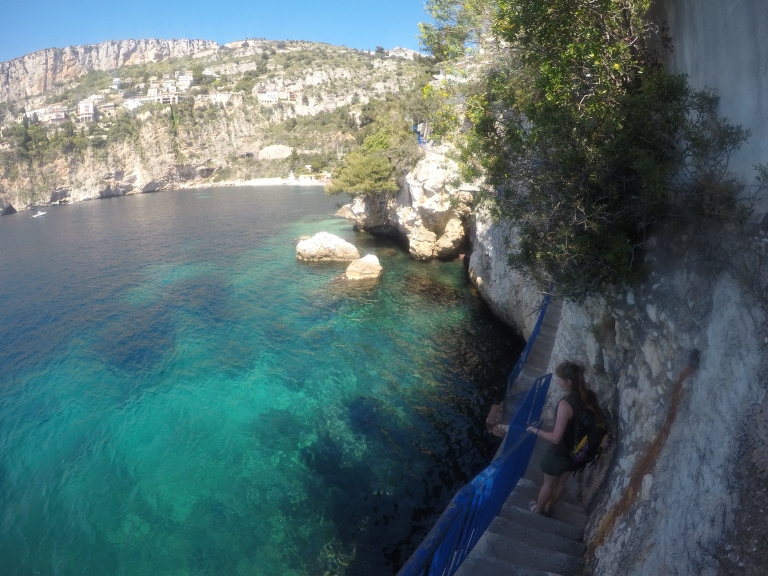 We left Peillon to cross the border into northern Italy. As some of you may know, Pete and I worked in Piedmont in the summer of 2015 and we were really excited to return. It never disappoints. We booked an agriturismo in Castagnole delle Lanze. These are are laid back B&B’s usually set on farms or vineyards allowing you to experience the rural Italian lifestyle. In the historic village of Castagnole delle Lanze is a fantastic restaurant called Wine Story with lots of superb vegetarian options. Piemontese food is very meat heavy so finding a menu with numerous veggie options is quite unusual. It was a refreshing, tasty meal making a change from the typical Savoyard cheese feasts.

Sunset over the vineyard

We had timed our visit perfectly for the 41st Vinum wine festival in Alba. Festivals are always so well set up and organised in Piedmont. There are many ways to enjoy this festival but we opted for the €10 coupon where you got to taste 4 locally produced wines. You also got to keep the wine glass and pouch so you could wander the streets of Alba whilst enjoying some of the best wines in the world. Of course, we also stopped off at our favourite Foccaceria for lunch. I also sampled some local Piemonte cheeses (Pecorino and Nastrano) and ‘street food’ – gnocchi with a light cheese sauce finished with black truffle, it was very tasty. Our favourite wine was a 2014 Barbera d’Asti from Simone Cerruti winery. 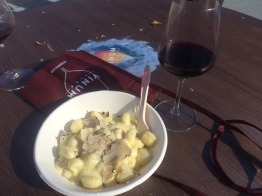 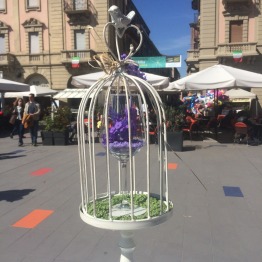 After staying at the agriturismo we moved to a campsite nearer to our old village of Castiglione Tinella. Ai Cuivin is a fantastic campsite and agriturismo with a outdoor pool and space for both campervans and tents. It is also a winery so you can sample some top wines. We did an 8km circular walk to Castilione Tinella and back through the Moscato grape vineyards, passing small orchards and around old farm houses. The views on blue sky days are always stunning of Alba, the rolling Roero hills and the alpine mountains in the distance.

Home is where you put the tent

Part 2 of the road trip will continue to Lake Garda to meet up with our friends Dom and Ligita. After that we will travel on towards Venice eventually stopping in Slovenia.

Some highlights of Piedmont: 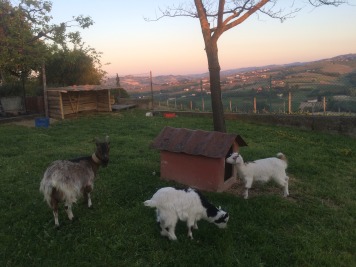 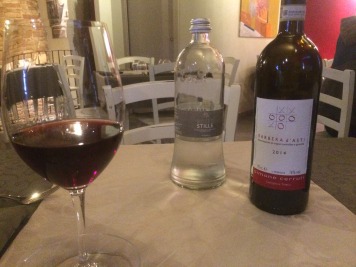